What is the difference between fx sound enhancer and DFX audio enhancer?

I’m curious. Hope all are well

FxSound Enhancer is an older, simpler, blue-themed version of the current FxSound, with a 9-band EQ and 5 improved and renamed Effects (compared to DFX). It had an animation tab with blue bars that allowed you to see the frequencies you were playing.

DFX Audio Enhancer is an even older version; it was a tiny interface with essentially the same 5 Effects in a less polished form which, in the beginning, didn’t have an EQ. This feature was later added to newer versions like Gold, sporting 9 bands plus 1 dedicated “HyperBass” slider (as it was then called). It had 3 different settings called “Music Type I,” “Music Type II,” and “Speech” – no one ever had a clue what those actually did… Another fact that’s probably worth mentioning is that DFX was the only version that ever supported customisable user interface skins.

Also, compared to the new, free, pink/purple version, both old programs had way, wày more pre-loaded Presets available - like, over 40 - even though some (actually, probably a lot) of those were pretty unnecessary to begin with…

If you go to https://www.fxsound.com , you’ll find both outdated versions mentioned at the very bottom of the page, with their own clickable links so you can see their features (see below). Neither are for sale anymore, all support for those old versions has ended, and all their licence keys have become invalid. All that’s left of them is their incomplete and blocked trial versions - which, admittedly, you can still download free of charge on their respective pages… 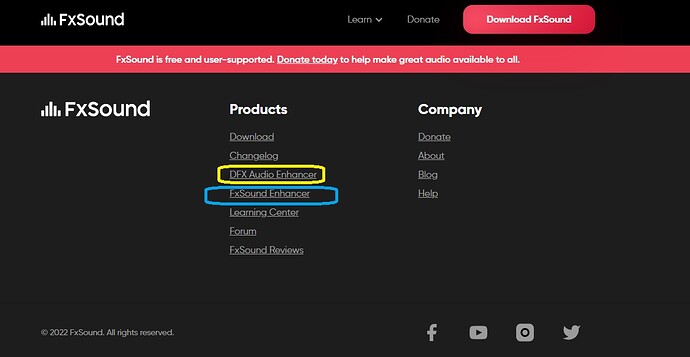 I hope that was helpful… But if you wish to dig deeper, there are plenty of videos available on YouTube which examine and demonstrate the old programs.

Other than the GUI, there is no functional difference. There was a virtual driver in DFX history but it evolved away. Wayback, there were different DLLs for WinAmp, JetAudio, etc.

I do not know version numbers. Read what you need. The latest commonly stolen version of DFX is also my preferred version of the software and its function. My preference is limited solely to the GUI. It is likely the version to which you refer.

There is a control set in the final release of FX Sound that may not be in DFX. It is irrelevant. Any user qualified to properly use those controls would not use FX Sound.

True reproduction. There is no sounds better, only less unpreferred.