FXsound works BUT only sometimes

First i’m no tech expert. (cue eyeroll) Its probably a pain in the ass explaining stuff over and over to people “like me.” I get it. Bare with me please.

I have an HP Envy running windows 11. I’m new to Fxsound but I love it so far… well when it works. It does work sometimes and when it does its been great. Sometimes I’ve gone to play something and I’ll get absolutely no sound. I can see its working but no sound comes out. Usually after messing around with stuff it starts again.

This time is different. I run FXsound on this computer which has my Plex server on it. This laptop is mainly used for media so its important i get this solved. Anyway, fxsound works when i play audio from PLEXAMP. When i go to play a video from the PLEX app though no sound at all. I don’t get it. Ive read thru these forums. Tried the stuff you guys mention such as disabling other devices and going into the properties to uncheck the box giving another app a control. But i still can’t figure out what the hell is wrong and its really frustrating. i would really like to get this solved if anybody has any suggestions.

By the way, if somebody does have a suggestion please put them in step by step so i make sure i’m doing it correctly.

I appreciate the help

Hi Zach,
That sucks.
I"m no tech expert either, all I can do is summon Vijay, FxSound’s lead programmer.
@bvijay: User also experiencing no sound when using FxSound in combination with the PLEX app, can you please troubleshoot?
Thanks again.

Hey thanks for replying.

What exactly do you mean by troubleshooting? If you mean try the steps in the help section then yes i have. Like i said in my original post, I’ve tried the whole disable the extra audio devices and unchecking the box that for exclusive use in properties. I’ve tried that several times.

The problem though is that the sound works. Like I’m on youtube and it works fine. But my plex app on windows… ZERO sound. The plexamp player on windows… works. Its just odd. I’ve tried uninstalling the plex app and reinstalling… didn’t change anything. So I’m at a loss.

What exactly do you mean by troubleshooting? If you mean try the steps in the help section then yes i have.

Don’t worry, I’m pretty sure it won’t be the standard tips you find on the Help page.
@bvijay knows things about this program that others don’t; if anyone can help you out, it’s him.

OK thanks. but i don’t understand whats going on. yesterday it was playing on youtube. now today it won’t play sound on youtube. i can’t think of what it might be. but its really causing a problem now. I want it to work but i also don’t have the time to sit and try to figure out why its not working on some days.

I can understand that that is annoying.
You can always simply disable the FxSound device in your Windows Sound settings…
@bvijay: We could really use your help…

Hi @zach,
There are two reasons that I can think of for audio not playing through FxSound.
If there is any other audio enhancement application running on the PC and if the audio playback device is setup for exclusive mode, then the other application can take control of audio playback and FxSound will not be able output audio to the device.
I have attached a sample screenshot of the setting in Control Panel → Sounds. 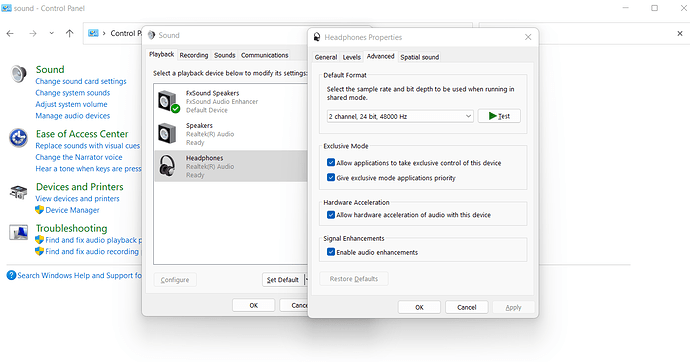